Welcome to the home of softball in Oxfordshire and the Oxford Softball League. Here you will find details of how to join a team, how to get in touch to find out about introductory training, as well as details (coming soon) of the season schedule and league table.

Softball has been played in Oxford since at least the early 1980s which led to the founding of the Oxfordshire Softball Association (OSA) in 1990. The Oxford Softball League plays most of its games on Tuesday and Thursday nights at Horspath Athletics and Sports Ground, Horspath Road, Oxford OX4 2RR.

Visit our Facebook page for regular announcements and details of events, training, and games.

Currently, the Oxford Softball League is for mixed (co-ed) slowpitch softball; however, there are opportunities for ‘single sex’ tournaments and many of our players play fastpitch softball. Slowpitch softball is a social team sport, played by teams made up of 5 men and 5 women. The ball is thrown (pitched) underarm and hit by the batter towards the fielders on the defensive team, who wear gloves on their non-throwing hands to catch the ball. Its closest comparable sport is baseball. Despite its name, the ball is hard, but larger than a baseball. Find out more on our About softball page. If you’re new to the sport or the league and would like to attend an introductory session, please head over to our new players page. We’d also love to hear from you if you’ve played before and are simply looking for a team.

Covid restrictions now behind us, the league is due to begin competitive games on 3 May 2022.  Prior to that we have:

During the first seven weeks we were in a ‘less competitive’ format to welcome lots of new players into teams within the league.  League games continue to be at Horspath Sports Ground each Tuesday and Thursday (see schedule).  Registration links are emailed around to captains.  If you’re new, and want to get in on the action, please register as a new player first. 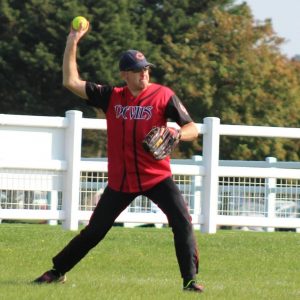 Keep an eye out for announcements! New players are always welcome and we will be running occasional training sessions, leading up to a series of pre-season sessions throughout April which offer an ideal opportunity to get involved. If you are interested in registering for such events, please let us know:

These sessions are completely free of charge and all equipment is provided – all you have to do is turn up and give it a go!

No experience is necessary but if you have played before that’s an added bonus. There is no such thing as a ‘typical’ softball player – players in our league range in experience (from complete beginners to those that play at the highest national level), age (from 14 to 60+), fitness levels and nationality.

However, being a co-ed league makes us extremely sociable – you will find most players in the onsite bar after games, there are social events throughout the year and some even play weekend tournaments together.

So, whether you are…

…Oxford Softball is the place for you!

As you can see from our 2021 (comp) league table, we had a 3-way points tie at the top of the table, with Spirits, Rebels and Angels all with 6 points each.  The winners were worked out by looking at the head-to-head results.  These are the results where these 3 teams played each other.

We began the second part of the season on 22 June 2021.  This time it’s competitive (although very respectful of our large numbers of new players, I think).  These are the temporary arrangements/rules:

As we are in a ‘building year’, please have as much generosity to your opponents as possible, especially where your opponents have several rookie players in evidence. On the other hand, this is a competitive phase: we’re looking for winners and awards for batting etc.

From 27 July, we need to play 2 games on Tuesdays and 2 on Thursdays (due to pitch availability). The round robin (and your official games) may conclude on 5 August. However, as the 4th and 5th place is crucial, there may be a playoff for those teams lined up at 4th and 5th in the table. The entire table is very likely to determine the two divisions next season. So, extra rules:

Possibly a few fun games on 10 Aug as desired.